Mia, This is Phoebe. Phoebe, Mia

~for both of them

This feeling is divine—physical, somatic, swelling my salivary glands and oozing from my fingernails. And I didn’t take anything; it just showed up, came over me: my old girlfriend, my first girlfriend, the one, as a kid, that stays forever, you never get over, you never get rid of her, she’s the first—a dream of Phoebe.

I woke up (I dreamed I woke), and there was Phoebe beneath me and we’re floating in a slurry of senses, smearing our faces together, which is to say not a kissing so much as a deliquescent surrender of my face into hers, and hers mine, mixing faces into a plasma of everything I ever felt for her.

It was longing suffused with completion. I remembered her taste, her black hair, her dark eyes that took me in and now when they did on this night, came the promise of a little something she might say, a noise at least, to reassure me this was real, because, remember, it’s a dream and the girl died twenty years ago and I’m happily married. And I must have had a dog, that I’d had once, in the bed with us because this thing moved, sort of raised its head up under the covers beside us.

But then as dreams will have it, it’s not my dog. Turns out it’s my wife, Mia, and this is terribly unfair. I’ve never been unfaithful nor would I be, but what can you do with dreams?

Phoebe is trying to push me off of her but we’re sort caught of red-handed here, a little late for denying anything so I reach over and gather Mia to us.

“A gentleman uses his elbows,” she says, meaning when he’s on top and showing thus some consideration for Phoebe, which is a good start I figure.

“It’s probably one of your jealousy dreams,” she says. “You know, that’s what really pisses me off about you, you have my jealousy dream and you get to play the wayward husband. Your happy happy is just frigging unboundless!”

“No, no, I said,” said I. I tend to come half awake in dreams, so that ‘I said’ is me starting to wake up. But who would wake from the best two women of his life, who have more than a little to do with each other, though they never met, the one long dead the other thoroughly sick of hearing about her.

“No, sweetie,” I say. “It’s no happy happy unless you two get along, you have to like each other, and you would, I’m telling you, you’d hit it off, go shopping… Christ, you’re both so smart… maybe a play?”

I turn to Phoebe: “Could you help me out here, say something?” She’s working on it, she’s come from so far away, a little eternity lag. So I say to my wife,  “Look, Mia, could I, just, could I cup your two faces, like this, up to mine?”

And then, to cinch the bargain, I go for her most vulnerable spot:  “Do this for me, and I’ll give you a back rub.”

Dream—flash—becomes a cartoon, as if: they both roll over simultaneously to offer me their naked backs, which are so different that it’s hard to concentrate.

Can you pat your head and rub your tummy at the same time?  I can’t. I can, but it’s hesitant and awkward and each lapses into the other, so these girls are getting simultaneous and bi-symmetrical backrubs, the best I can do under the circumstances when in fact I used to give backrubs to seduce women, not put them to sleep. But off to sleep they drift; Mia begins to snore a little and Phoebe’s clutched a ringlet of Mia’s hair, pacifier-like.

And the dog—there was a dog after all—large fluffy tail thumping over by the door, it wants to go out. Dog, you can pee in the rubber plant for all I care. I got these double hummocks of buttocks insisting on my attention here, though lord knows what to do with them.  A fine perplexity of haunches you got me into, Dog.

I cover them as best I can, not easy since I’m sitting on the covers, in the valley between them.  I smooth their hair. I feel sleepy myself and notice Phoebe’s beginning to fade; so I shake her a little.

There is a murmur muffled in pillows, not sure whose.

“Phoebe, don’t go. We won’t have this chance again.” I rub a little harder, more sensuously, Phoebe on the left, Mia on my right. I want to wake them but I know most any full-sized disturbance will blow the dream; so I’m stuck, and then my hands begin to ache. I try humming softly to them, but the dog thinks I’m calling it. I don’t think about yanking the covers off and somehow making mad monkey love to them, we three, because…it’s a dream with its own druthers and it’s just not going in that direction. They might not fancy the same monkey anyway.

Yes, well, instead of massaging for my supper, I begin to scratch, gently, nails running over the little impurities on their backs, tickling pores, sending tingles, imagining I’m their skin so I know where next to go. Their little coos of pleasure are too delayed and sporadic; one must second guess.

And where does one go, caught between longing and completion, far and near, odyssey and Ithaca, act and thought, then and now, night and day, love and love?

As usual, Mia nails it.

I can’t quite hear her at first so I have to whisper what. What, hon?

The Hopeless Romantic: A Collection of Poems, Prose,

Prose, Fiction & Art on The Idiosyncrasies of Love 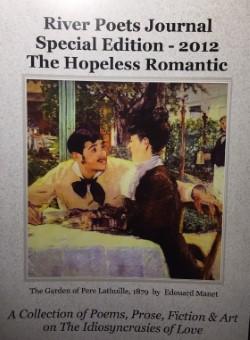 Back to FLASH Table Contents

You Belong to Me; more on both of them